Getting Tattooed by Angelina Jolie's Monk

When a well-traveled International Business major sinks his teeth into real estate, watch out! Enter William "Will" Lengyel.  His travels provide...

I recently flew across the pacific to visit Southeast Asia. More specifically to visit Cambodia, Malaysia, and Vietnam. I’m only going to talk briefly about my experience in Cambodia in this post because that was without a doubt the best travel experience I have had thus far in my life.

Yes, I went to Angkor Wat but I have an even more amazing story to share. I got a Khmer Sak Yant tattoo. For those who don’t know Sak Yant tattoos are sacred body markings in Buddhist culture.

For reference, Khmer means Cambodian the same way citizens of the Netherlands refer to themselves as Dutch.

I will try to cut to the chase of the tattoo story. I land in Siem Reap with some friends with the mindset that I needed to get a Sak Yant tattoo. It has always been a dream of mine. 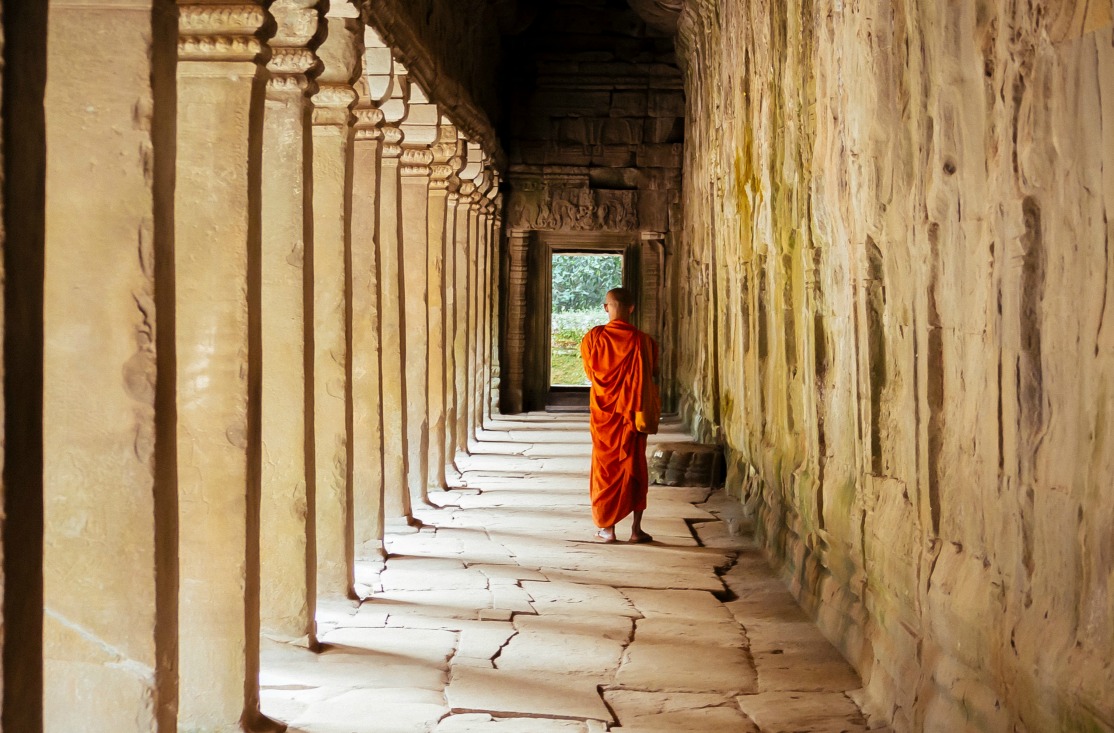 I ask the Cambodian driver we hired if he knew anything about them and of course he did! I could not have been more excited smiling from ear to ear as he gave me more information about them.

He told me he knew exactly where to take me to get one.

Fast forward to the next day and he sends his cousin to take me. I was a bit nervous because his cousin barely spoke any English and it seemed sketchy that the original plan for such an event had already changed. I didn’t know this new person.

But I trusted my instinct since I wholeheartedly believe everyone is born a good-natured person and went with his cousin to the temple. We arrive at the temple filled with monks, nobody spoke any English, I was instructed to take off my footwear. 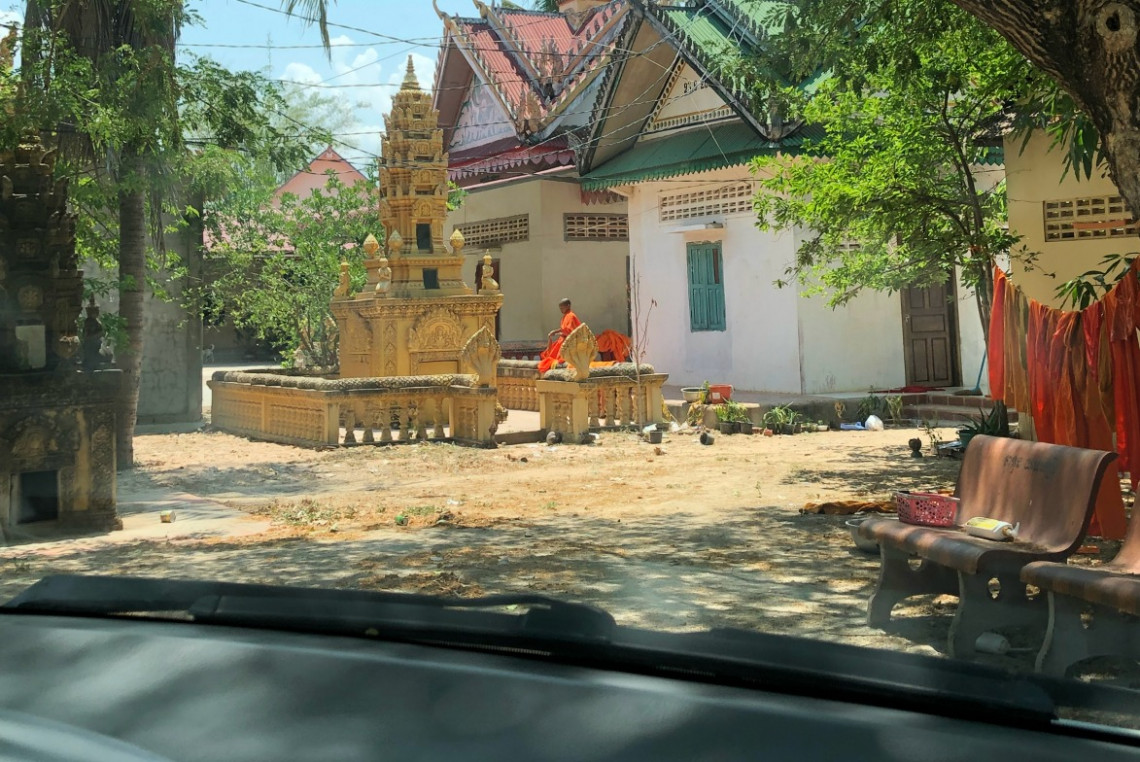 So I did. Here I am, barefoot inside of a temple in Cambodia by myself. I was by myself because my other friends had other plans. I was determined to do this though no matter how uncomfortable it made me feel though. It was extremely hot as you can imagine, also.

I remember looking around and seeing the different kinds of Buddhist architecture laying about the temple area. It was all so spectacular. I also remember thinking to myself, do you really want to do this?

I was starting to get really nervous. The monk noticed and offered me some water bottles, hot water, but at least he offered. Neither of us spoke each other’s language but somehow we connected and he made me feel comfortable.

One funny thing was that he had an iPhone 4 I believe it was. Fast forward a little and I’m waiting while he prepares the drawing, needle, and ink. It’s almost time! My heart races faster by the second and finally it’s time. 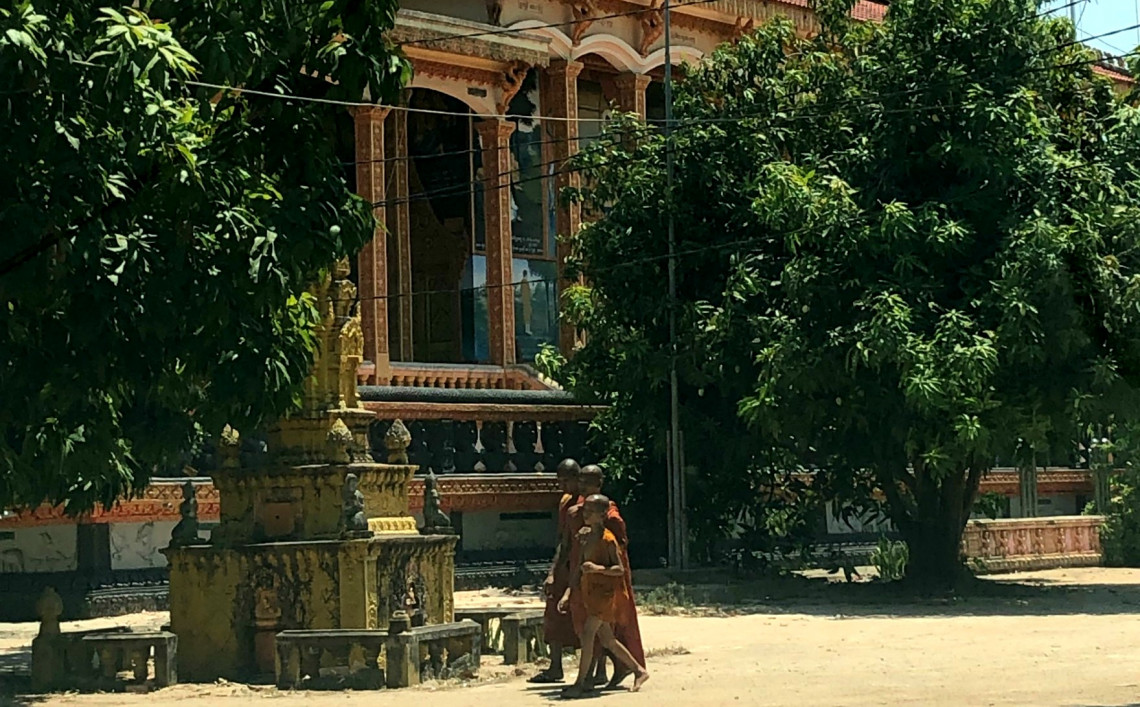 I get asked to sit down on the table that is outdoors to begin tattooing. Yea, I’m outdoors on a table in Cambodia getting tattooed. There’s a chirping bird in a cage next to me and another teenage monk sleeping in a bed as well not far away.

It was quite the situation but a funny experience nonetheless at that exact moment. Throughout the tattoo, the driver's cousin was still there and begins to play Old Town Road on his iPad.

I imagine he has no idea what Lil Nas was rapping but I almost died laughing. I tried to tell him I’ll play music. He gave me his iPad and I played my house music and the few people who were around started to dance to it so that was awesome.

As we started to near the end of the tattoo the monk asked another monk to get the offering for Buddha to do the blessing service for the tattoo. These tattoos are legitimate Buddhist prayers and are free to do.

To finish this story off here is a caption from a post I did on Instagram about the Sak Yant:

“Tigers have forever been my favorite animal for a multitude of reasons. It was a dream come true to get tattooed by a monk inside of a temple in Cambodia in true Khmer Sak Yant fashion. 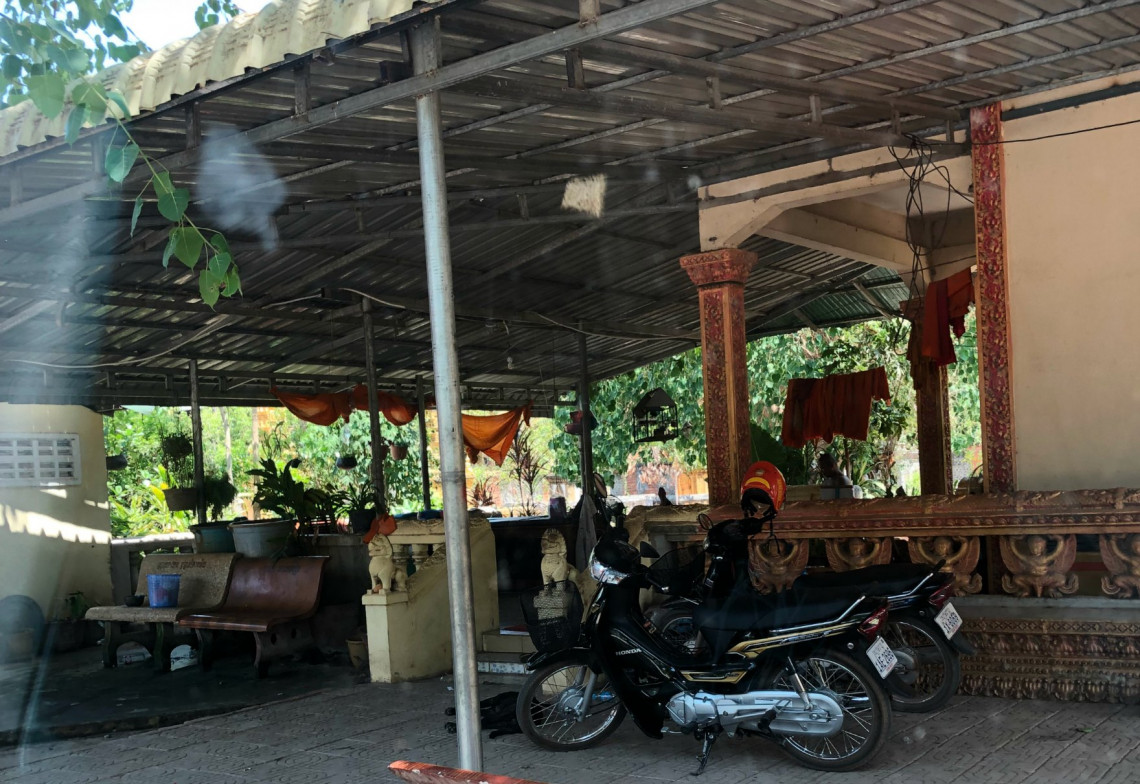 The tiger represents power, authority, strength, conviction, and most importantly to the people of Cambodia as well as myself, protection.

The tiger is an awesome creature and one that is feared and respected by all other animals that live in the jungle.

The monk had a wide variety of tiger designs drawn in a notebook for me to choose from. I chose one that I loved and he looked at me and said there is a more powerful Khmer Sak Yant tiger design that he thought I needed.

There wasn’t much difference between the one I originally chose and the one I ultimately ended up getting as suggested by the monk based on how he perceived my aura. Nonetheless, that was still a neat thing that happened. 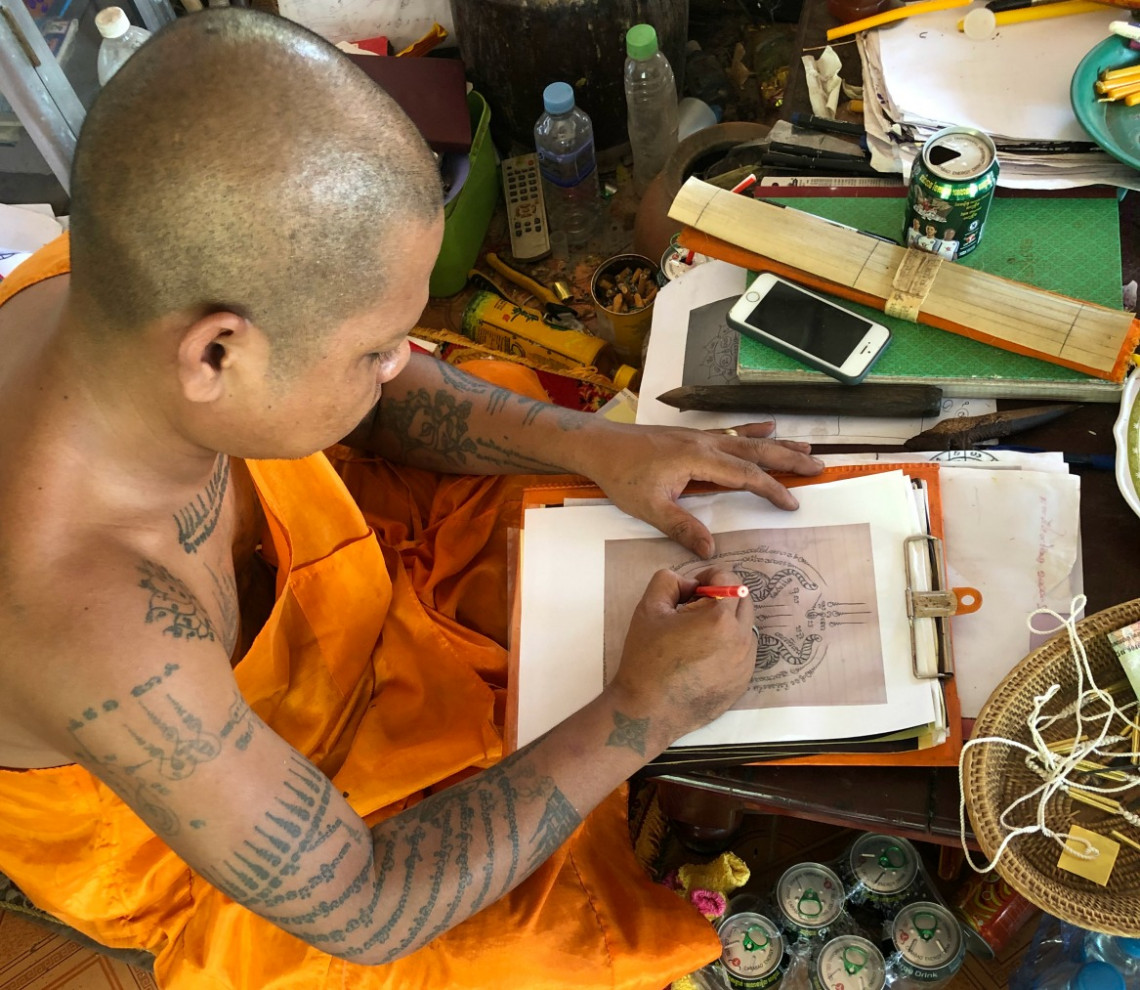 Unfortunately, since the year 1900, the world’s tiger population has dwindled from over 100,000 to less than 4,000 due to illegal poaching and habitat loss making the tiger functionally extinct in many countries where it once thrived.

However, recent efforts to breed and reintroduce tigers into the wild have seen the population grow from 3,200 in 2010 to 4,000 in 2019. This is an animal that needs to continue to be saved before it is too late!

All in all, it was the best experience of my life. When the tattoo was finished I wasn’t just happy, I was PROUD. I was really damn proud of myself. I did something that was meaningful to me. And, this monk has tattooed Angelina Jolie too!

Not to mention, the smile on the monk seeing my happiness when he had finished. He was so happy that I, as a foreigner, shared the same happiness for his culture that he has for it himself. 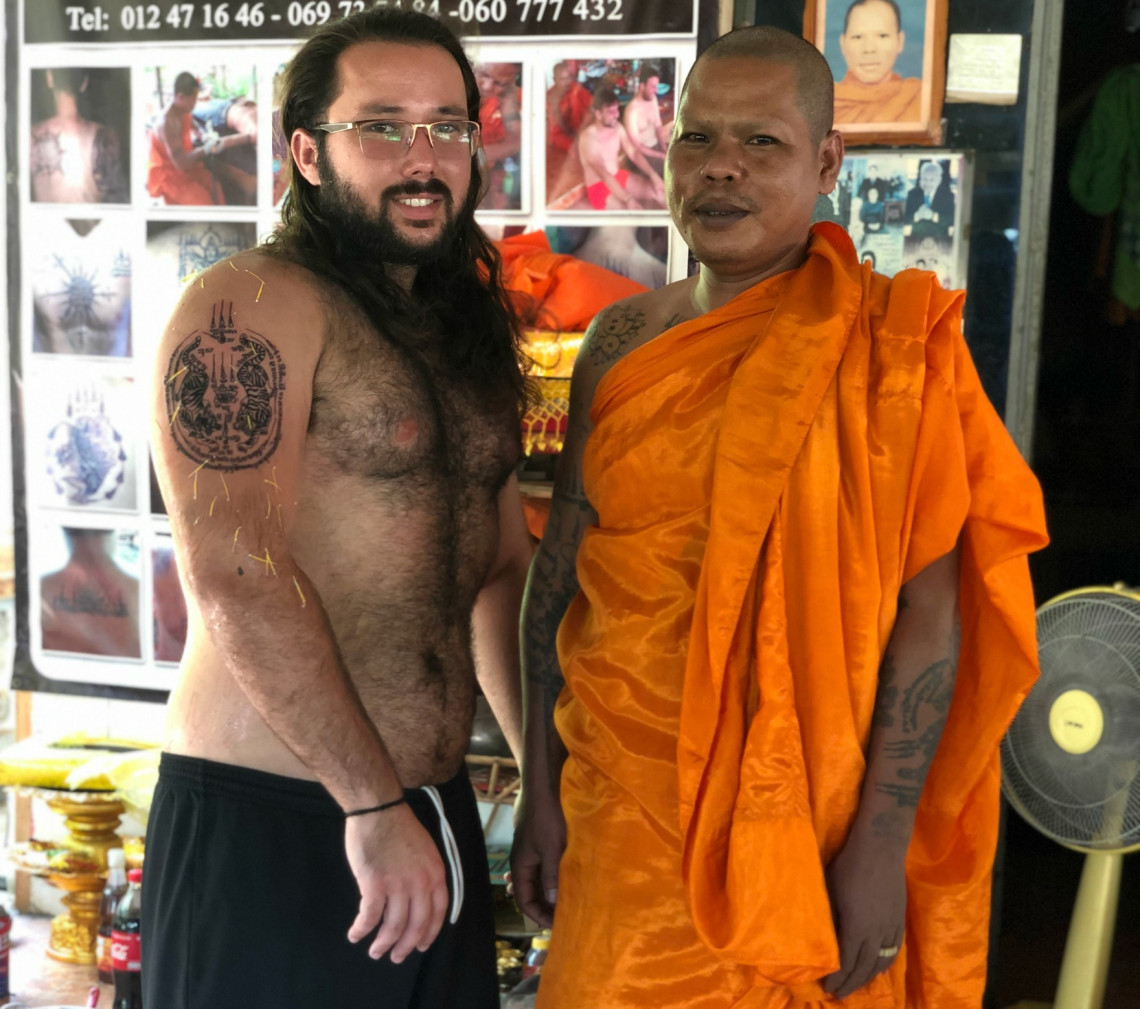 Lastly, what's interesting about going to a place that a lot of people warn you about or doing something many warn you about is that neither you nor they truly know what it's going to be like until you see it for yourself. Avoiding an experience or a place or a culture because of fear is usually a terrible mistake.

So instead I've been approaching dear as an indicator for something I should pursue. I take it as a sign from life that I have something to learn or have a previous judgment to be challenged. Whether that judgment is one of my own or someone else's.

Once I push past that initial hesitation, I get rewarded with the memory of a lifetime. Visiting some of the places I have now been to or the places I soon plan to go to is an amazing manifestation of this.

I felt welcomed by some of the nicest people I have ever met. I had some of the best food I have ever had. Most importantly, I always leave excited to come back and explore the rest of these countries.

People always tell me that I am crazy for doing certain things or visiting certain countries. In response, there's only one thing I love to express to them. When fear tries to hide an experience from you it usually means that what you are looking for is right on the other side.